Roxane Gay: columnist, editor, professor and writer, has continuously swept the world away with her witty commentaries on her life experience. At thirty-five years old she has already written five books, one of which being the much loved, well-received Bad Feminist essays. She is a frequent contributor to the New York Times where she posts about her opinions on society and discusses politics and society regularly such as ‘Ask Roxane: I’m Outraged but Failing at Activism. Why?’ Her work has also appeared in Glamour magazine, Best American Short Stories and she is the co-editor of PANK, a literary art collective publishing innovative prose fiction.

As well as her essay collection ‘Bad Feminist’, Roxane Gay wrote a short story collection Difficult Women and memoir Hunger, which are all examples of modern literary fiction/non-fiction works that are well worth a read, particularly with Gay being a cultural critic and an advocate for feminism, shown in all pieces.

Bad Feminist, as a collection, explores Gay’s interpretations within a feminist society and depicts memories of her past and how it has changed her in her current stage of life. She began writing essays from a young age, and at only twelve years old had traumatically experienced sexual assault. Gay credits this experience as one which influenced her writing at this time. Bad Feminist is breath-taking and presents a wide variety of topics including being a first-year professor, her love for playing Scrabble as well as discussing bestselling novel The Hunger Games, and love – both positive and negative. Her essays engage primarily in pop culture, where she speaks about major influences such as the Sweet Valley High series (written in the eighties until early noughties and aimed at young adults about young love), drama and relationships, and her upbringing as half-Haitian and half-American.  She writes about being the only person of colour in her school and how that caused her to be segregated from her peers.  Bad Feminist is broken into five sections; ‘Gender and Sexuality’, ‘Race and Entertainment’, ‘Politics, Gender and Race’ and ‘Back to Me’. 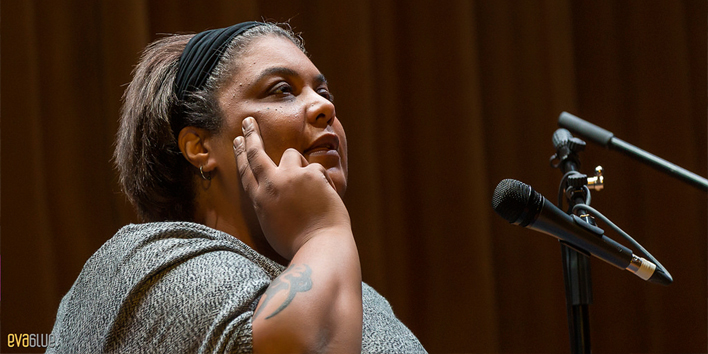 Roxane Gay has a lot of support in the gay community, as she is openly bisexual. She explains her role as a feminist and how despite not having the closest relationships with girls from a young age, she is still influenced to be a feminist and support equality. The book has been widely reviewed across the globe as Gay delivers a voice that is powerful, dominating but also tranquil. A Guardian critic wrote ‘her writing is distinct for being subtle and discursive, with an ability to see around corners, to recognise other points of view whilst carefully advancing her own….Gay has the voice of the friend who has seen a lot and takes no prisoners’. Her diverse topic range comprised within the collection of essays, to a modern reader is incredibly clever. The inclusion of anecdotal information and her personal life experiences makes her account much more relatable and an extremely compelling read.

A compilation of short stories entitled ‘Difficult Women’ is another collection by Gay. These are heavily influenced by magic realism, women that live lives of privilege and poverty and about the rare force and beauty of human attachment. It is a vision from an ordinary pair of sisters in modern America, to a stripper and a black engineer plus more. The novel was a winner of the Black Caucus of the America Library Association Fiction Award in 2018 and shortlisted for The Story Prize and Aspen Words Literary Prize in 2018. She ‘brings the powerful voice that flows through her work as a novelist and cultural critic to the 21 short stories in her first collection’ (BBC.com). Gay represents a variety of women, some in abusive relationships which can be difficult to read in terms of the subject matter, but her precision of language and the construction of sentences still manage to leave the reader fascinated. Some of her stories on dealing with emotional trauma could potentially make you feel uncomfortable, but Gay manages to cover effectively as these issues need to be clearly addressed to contemporary readers, especially since she gives a clear voice that many can connect to.

As Gay publishes more and more texts, she manages to stand out from the crowd with her works, involving the reader to delve into her life (particularly in Bad Feminist). ‘Hunger’ is her most delicate account out of all her works, where she tackles themes such as her body, weight gain, sexuality and trauma. This memoir was also widely favoured as it is so vivid and raw and reveals her life in a lot of intimate detail. She remains an extremely inspiring author by writing from the heart in her most vulnerable states, and showing how strong an advocate and how proud she is to be labelled as a feminist. She continues to address this throughout her career and hopefully through her future work.