by Iona Middleton and Lauren Dittmer

‘You’re such a fu*ing hoe, I love it. ’ You might recognise this lyric from the current UK number 3, ‘I love it’.

Why is it that the music we listen to can have a misogynistic theme or lyrics when the same words would have repercussions if spoken? In a conversation, they’d bring out a different reaction; they would definitely be taken as an insult. Yet many of us, when embedded in a catchy tune, don’t acknowledge the true sentiment of a track.

This is an issue that has been embedded in our mainstream music for decades now; possibly highlighting a deeper problem in society. If music is a way for us to reflect our emotions and feelings, then surely the large amount of misogynistic lyrics in our mainstream music scene brings insight into society’s thoughts towards women. In 1987, the rock band Guns N’ Roses released their song ‘It’s so easy’ where they sing the lyric ‘Turn around b*tch I got a use for you/Besides you ain’t got nothin better to do/And I’m bored’, entirely objectifying women. While such phrasing may be expected of lyrics written over 30 years ago, this theme continues to be popular still today. In 2013 Robin Thicke bagged the number 1 UK spot with his song ‘Blurred Lines’, in which he talks about ‘domesticating’ a woman, calling her ‘an animal’. This song in particular sparked conversations debating whether Thicke was promoting non-consensual relationships.  What is even worse, it isn’t just men making these heavily sexualised songs. Taylor Swift, for example, is often guilty of slut shaming other women with words such as ‘she’s an actress/She’s better known for the things that she does on the mattress’ (from the 2010 song ‘Better than Revenge’).

At this point, both writers and listeners do not consider lyrics like this to be an issue; such vocabulary is used so often and so casually that it’s now just ingrained into our music culture. The normalisation of sexism is indeed present in most aspects of society. Yet, while in today’s atmosphere of strengthened gender equality activism many previously accepted norms are being challenged, it seems that the music industry is being spared under the protection of creative freedom.

Censoring music defeats its purpose of antagonising and challenging established views. Kanye West quite famously said ‘First thing is I’m an artist and as an artist, I will express how I feel with no censorship,’ while defending his song ‘Famous’ in which he takes credit for Taylor Swift’s career. However, if Kanye uses his music to express himself, surely this only suggests he has anti-feminist opinions and his lyrics merely represent misogynistic thinking. Furthermore, to feminists’ disdain, these are the songs that week after week make it to the Top 10 in the charts, even when actions such as the #MeToo movement and the attempted shutdown of the slut-shaming dialogue cover our daily media. These songs must be doing something ‘right’ to be this popular in the first place. Perhaps what is ‘right’ or comforting to many is the provision of a sphere of free public expression of sexism. 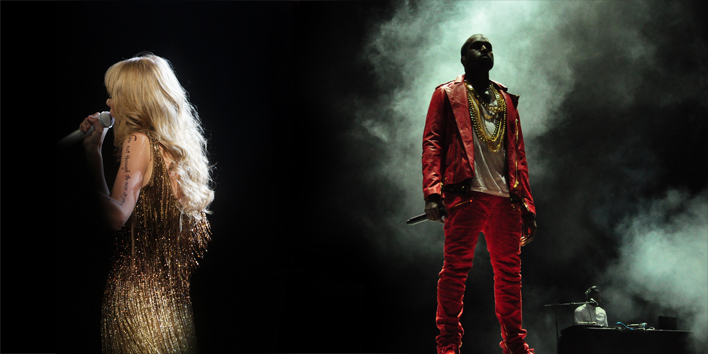 Defending misogynistic lyrics as exercising ‘freedom of expression’ is not so far removed from the ‘it’s just banter’ excuse. It is within our best interest to ensure that music, as one of the most influential forms of media in our society, is held accountable for generating hate, to the same standards as any newspaper or television production would be.  Music’s messages may even be more significant than those of mainstream media, as it arguably has a stronger impact on most young people with its continuous presence in everyday life.

In this era of celebrity idolism, artists do more than make music, they are influencers. It is more than possible that their lyrics can misconstrue a fan’s concept of what is acceptable, and be taken as suggesting misogyny is okay. These notions of female repression find their way into everyday language, especially that of impressionable young people attempting to mimic their idols. The musicians are role models, whether they want to be or not, and should always take into account this responsibility. Even though there is a spectrum of misogyny to consider, any extent of objectification and sexualisation can make girls feel like they have to look and act a certain way in order to be considered desirable or be accepted in their peer group.

While yes, lyrics ideally would be clean of misogyny, their current state reflects the still prevalent problem with female representation. If artists are using music to express themselves, then it is indeed a shame that popular music is full to the brim with misogynistic slurs. In the attempts to change views around and about women, feminists should not spare of scrutiny artistic and creative expressions, as their subconscious effects may arguably be even more detrimental to the movement.

Unfortunately, regardless of how much we may disagree with the lyrics, it’s unlikely that we’ll stop singing and dancing along to the current hits. Music artists and producers know what they are doing. They know the ideal tempo, tune, key and chords to use to make a number 1 hit every time. For the time being, isolating ourselves from sexist lyrics is virtually impossible; they are surrounding us in almost every public space, and certainly most gigs and clubs. Although we may not agree with the content of the lyrics, we won’t be thinking about that when we’re singing at the top of our lungs.

Women in Rock: ‘The Cool Girls’ Are Turning Feminist
THE FUTURE IS FEMALE: And It Rocks