’ll admit, as a white woman, I felt sceptical in agreeing to write this piece because I was worried that by doing so my voice could potentially override those of women of colour. I am a feminist, and I want to achieve a sense of equality between all women. But my worry when beginning this article was that, by using my voice, my opinions and my platform, my work here would simply be redundant. There are so manyetter qualified women of colour out there whose stories I’m sure are far more influential than my own on this matter. So instead of making this a piece on the pressures which people of colour experience in our very much white, western feminist society, I’ll be talking to women like me and leave the platform open for women of colour instead. That’s right, this one is for our white readers, and how it’s about time that we – collectively – start acknowledging lives other than our own.

I am white -and a strong-headed feminist to say the least. But the problem with people like me (and by that I mean white people) is that we so often become consumed by our own problems and forget others whose struggles are so much bigger than ours (If you are looking for proof, just search up any well-read western newspaper, look up what they prioritise in their coverage and you’ll see for yourself). Now, I’m into the habit of trying to check my privilege regularly so as to include everyone in my ideals of feminism, but mistakes can be made and that’s okay – you pick yourself up, you learn from them and move on. What I’m here to talk about aren’t the little mistakes you might make on your journey into becoming a ‘good’ feminist, but how it’s vital that you start including everybody into this goal – not just women like you. This is where the coined phrase ‘white feminism’ comes in.

White feminism is the epithet used to describe a theory of feminism which primarily focuses on the struggles of white women, without addressing any forms of oppression experienced by women in minority groups, such as but not limited to: race, religion, sexuality and class. This doesn’t mean that all feminism practised by white people is exclusively white feminism – but the feminism practised by majority groups which actively – or passively – minimise the experiences of minority groups, like women of colour. 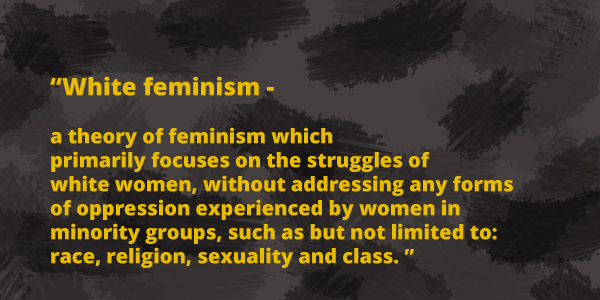 I’ve included Lena Dunham, founder of ‘Lenny Letter’ and writer of hit award-winning television series Girls because she is the perfect example of this threat to achieving intersectionality. In 2017 self-titled feminist Lena Dunham claimed that her friend and colleague Murray Miller was a part of the ‘3%’ of rapists falsely accused. This claim was made by actress Aurora Perrineau where she states that in 2012 after a night out with some friends she wakes up: “He was on top of me having sexual intercourse with me. At no time did I consent to any sexual contact with Murray [Miller]”. Dunham, in her public statement denouncing the allegations and defending the accuser at hand effectively uses her power as a feminist to silence Aurora Perrineau. The Independent label Dunham as having ‘failed women of colour’ for the discreditation of the young black actress. Effectively, selecting to use feminism when it suits her and choosing to believe most women, except the black woman who accuses her white friend of rape at a party – despite her repeated campaigns within the #MeToo movement working to make all women alleging rape believed. This example, although extreme, is perfect in showing the selectivity of white feminism and how this is an issue.

A simpler example could be looking to our strive for a well-represented workforce. We all want to see more women climbing up the corporal ladder, and certainly this is beginning to show. But when you break down these women, you’ll start to realise that they’re more than likely to be the white, privately educated female versions of the ‘Big White Man’. Statistics from the US show that the most popular job for black women (Home/healthcare: $27,795USD) pays almost half of what the most popular job for a white woman  does (Teacher: $51,110USD). In this example, it is evident that different women are given different opportunities because of their social and racial background. To become a teacher you need a degree, to get a degree you need money, good grades and so on. So then, the problem with some sections of feminism is that they ignorehe fact that all women should be represented and given the opportunity to climb above that shiny glass ceiling. And, most of all, they ignore the fact that nothing is currently being done to resolve this issue.

I guess, as a student writing for a student paper, there’s not much I can say to fix these very big issues that are way out of my own hands, and after writing this I’m starting to feel very daunted and concerned about the state our society gets itself into. It is not a change that will happen overnight. However, as students and as individuals we can achieve change by remembering to reflect on our own actions and their resulting consequences. A conscious effort to be better makes all the difference and can completely change someone else’s experience at university. Ten small, individual steps can make a huge impact. I hope that by outlining the threat with white feminism, I can help contribute to the much-needed change and encourage you all, in every circumstance, every march, hashtag, debate, to think about all women and not just the ones close to your side. Reach out to them, believe in them and listen to them.

Summer 2018’s Films vs. the Bechdel Test
Ford vs Kavanaugh: What You Need to Know