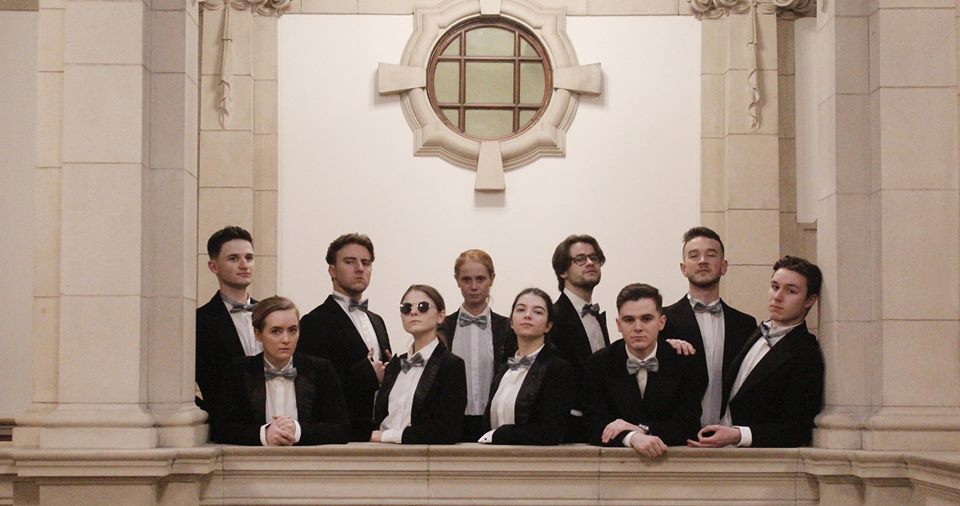 The last Act One production I watched was A Midsummer Night’s Dream. Considering I had seen several adaptations of the Shakespearean play I was slightly concerned about being bored, but Act One did not disappoint with a unique and exceptional take on the classic love story. Fast forward two years and they’ve taken on the challenge of Laura Wade’s satirical play about the obnoxious and frankly brutal ten members of the infamous Riot Club.

It’s a play about the arrogant nature of a group of entitled individuals that believe they have the right to special treatment and are willing to fight to reassert themselves. The comedy is played off their ridiculous egos and snobbery and whilst it’s not a particularly complex comedy, it’s impossible not to find yourself laughing most of the way through. Posh is a play that makes you think and gets you talking afterwards. At the end of the first act you find yourself arguing with the potential facts that people of this class actually believed the opinions voiced by the characters in the play. It becomes all too apparent the evil undertones that run through this play, when you’re laughing at the ridicule of the victims and supporting the barbarity of the villains. Posh makes you feel sorry for a group of Toffs that beat up a landlord and ransack his property, and as the last scene reveals, are also going to get away with it.

The cast were fantastic, arguably perfect at relaying the message of the play. Every character was distinctive in their role and drew you into the chaos that was unfolding. The ten members of the Riot Club were especially entertaining with their varied and hilarious outbursts of snobbery, their brilliant performances quickly made you fall into the trap of loving them. The comedy was punchy and comedic timing was faultless. There were a few moments of dialogue that were lost due to the background noise of other actors, but it didn’t do much to detract from the overall performance. Special mention has to go to Jack Kelly (Alistair Ryle) for his fierce and gripping monologue that marked the tipping point in the play and also Jake O’Neill (Guy Bellingfield) who was hilarious throughout. Benjamin Southgate (Harry Villiers) and Chris Brunskill (Dimitri Mitropoulos) were also a pleasure to watch. Even someone irreverent to politics would be able to understand the message of the play and this is all thanks to a brilliant cast and director.

The lighting, set and sound all worked to further the production and were appropriate for the play. I particularly enjoyed the use of lighting and sound during small segments that acted as scene changes. The music and sound effects were especially effective with pinpoint execution from the team during certain scenes. The choice to have a mixed gender cast was interesting but didn’t really do anything to further the message of the play.

Act One’s production of Posh was extremely fun and surprisingly thought provoking to watch. There were a couple of breaks in the pace, but the cast and crew led you effectively to a climatic finale that was shocking and didn’t disappoint. I can’t wait to see what Act One does next.