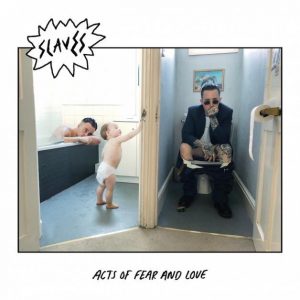 The bastions of middle class youth disillusionment return for a shorter, more consolidated and more heartfelt third outing, delivering what is without question their best record to date. AOFAL drops the Speakers Corner-shoutiness of their previous work in favour of something far more personal and emapthisable, dealing with themes of social media, self image, boredom, hate and good old fashioned break-ups too. Suddenly you’re not just screaming along with them, you’re in the same boat as them thematically too.

AOFAL also sees a welcome change in direction in sound. It’s more post-punky and original, though they haven’t lost their rough edge, which pokes its way through the album at all the right moments. The big punches come, however, when Slaves go off kilter and go quieter; ‘Daddy’ stands out in this regard. Though ‘Photo Opportunity’ kills it with the Weezer-esque structure and is anthemic chorus, which so effortlessly sums up life in the south east of England. Slaves aren’t just moving on; moreover, they’re becoming cleverer with their sound, and wielding it with the same ferocity and dexterity as their lyrics.

A prominent online reviewer – whose opinion I’ve always respected but on this occasion I thoroughly disagree with – said that Slaves are a band who “just use punk as a fashionable veneer to make somewhat edgy, substance-free pop rock”. I’ll give him pop rock in regards to AOFAL given that it’s got plenty of singles potential and is far less abrasive sound-wise than previous Slaves records (just listen to ‘Cut And Run)’, but to call them “substance free” is an insult to the fact that Slaves have cornered a niche of the UK music scene and turned it into some of the best records of the last 5 years.

When you’ve grown up in the same sort of placer as Slaves have, Acts Of Fear And Love comes across as a record that just speaks your language. It’s personal not just in terms of its tone, but because it knows exactly what you’re going from. Oh, and it absolutely rocks at some points.