Arvida Bystrӧm: if you haven’t heard this name before, it’s about time you did. She is a 27-year-old model, photographer and digital artist, with her main platform being Instagram. At first glance, Arvida is nothing but the real-life millennial pink Barbie; a tall, thin, blond, cis-gendered, pink-wearing, selfie-taking representation of stereotypical standards of beauty (and my personal unicorn-riding nightmare). However, the unavoidable pink elephant in the room is that she is also, quite surprisingly, unapologetically fighting for feminism.

Bystrӧm gained a great deal of popularity in 2017, when she appeared in the Adidas Superstar campaign. In the short advert, she wears a gentle lacy outfit in pastel pinks and looks like the true face of traditional femininity, while talking about this being a cultural construct. The 15-second video succeeded to outrage many and make its way into the news for a single feature of Arvida’s look: no, it wasn’t the shoes she was attempting to sell, but rather her proudly presented leg hair. While leg hair is undoubtedly something all women (be it secretly) possess, its public display by a model was enough to even attract rape threats. When Adidas hired her, they were most likely fully aware of the negative public response their advert was about to cause; in fact, they were probably hoping for it. By refusing to shave, the model turned a promotional video into a news-worthy story and let the brand cash in on the rise of feminism. Using progressive movements for the capitalist agenda can weaken their message, yes; however, this Adidas campaign proved one thing: it doesn’t take much for women to be attacked. As Arvida put it herself, ‘Me being such an abled, white, cis body with its only nonconforming feature being a lil leg hair (…) I can’t even begin to imagine what it’s like to not possess all these privileges and try to exist in the world’. 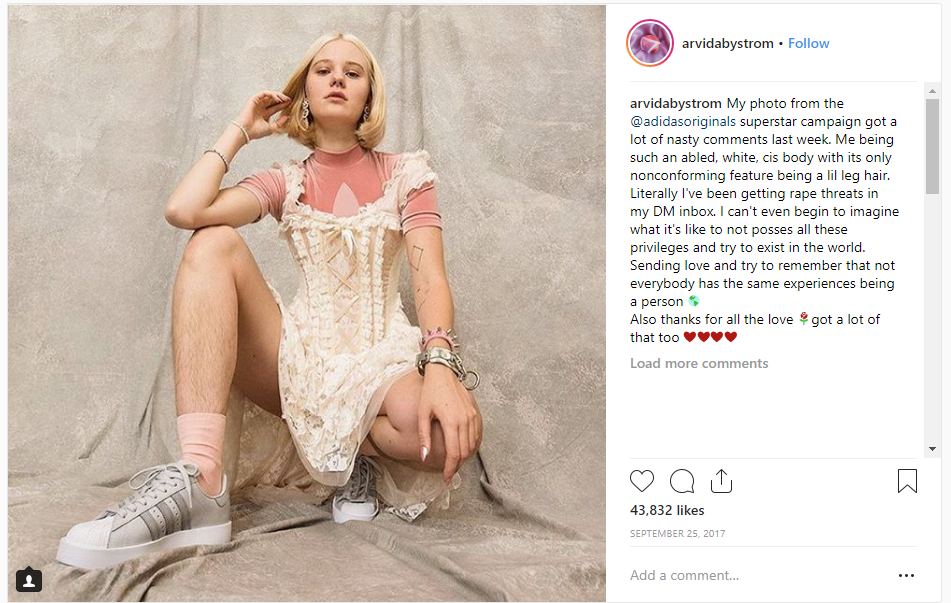 Society is still largely unaccepting of body hair on women – or any other drifts away from the traditional notions of beauty, we know that much. However, it is possible that small changes to what is deemed ‘acceptable’ would be more easily made by people who in many ways conform to the established social standards. It is certainly not ideal, but might be a more practical and realistic approach. One of the big problems for many feminists is the continuous preaching to the converted, with the demographic in true need of better understanding of feminism remaining untouched. Perhaps it is people with the kind of image which may appeal to those still living with outdated notions of what a woman should look like that can start introducing feminism to them. Hairy legs send one message to the misogynistic world when styled with a women’s rights placard, and a completely different one when paired with a baby-pink dress (that is not to say you should burn your placards, either). Bystrӧm’s photography is precisely about delivering feminism in an appealing package of pink hearts and rainbows.

With a strong focus on self-portraits, Arvida’s photographs aim to normalise the aspects of female bodies which are often shamed or purposely hidden. She not only demonstrates that even gorgeous models get these perceived ‘flaws’ but refers to them in a loving manner.  She specifically chooses poses which show off her cellulite (yes, even skinny women have it), affectionately frames her pimples in pink hearts and has been known to call body hair pretty. In this manner, Arvida reassigns positive associations to what are usually sources of insecurity and preaches self-love that is unrelated to a person’s body or its natural changes. While some of her methods of encouraging confidence are a bit too much for me (such as her 2015 project Selfie Stick Aerobics, which is a bit more self-centered and stereotypically ‘girly’ than I can stomach), the general message is clear: there is no reason to resent yourself for being human. The artist’s most beautiful sentiment is strongly expressed in her exhibition Cherry Pickings (most recently displayed this September in Zagreb as part of the International Photography Festival). The basic premise of the collection is that the human body is just as natural as a piece of fruit; if we are willing to accept a cherry with a dimple and still consider it delicious, there is no reason to disregard a person’s body as ‘ugly’ for having a similarly looking little dimple or pimple on it. She goes so far as to dress up her fruit in tiny pieces of underwear to remind women not to expect their behinds to be more symmetrical than a peach. Building on a connotation often found in classical art, the fruit is also intended to symbolise temptation and the sexualisation and fetishising of the female body.

By posting close-up pictures of imperfections on her otherwise seemingly perfect body, Bystrӧm additionally attempts to challenge censorship. A lot of aspects of the female body are unrightfully perceived as not appropriate for the public eye, especially on social media platforms. This is further explored in Bystrӧm’s book, created in collaboration with Molly Soda – Pics or It Didn’t Happen: Images Banned From Instagram. Bystrӧm and Soda collected Instagrammers’ images which have been deleted for being deemed inappropriate under the platform’s Community Guidelines. They found strong patterns emerging, most of which revolve around the policing of the female body. While some images are exactly what one could expect, others are rather puzzling. For example, an image of a woman holding her phone to her ear by having tucked it into her hijab was deleted by Instagram, in spite of it not featuring any nudity, violence or unlawful acts. Bystrӧm does point out that most images are of ‘white, abled, cis young women, often pretty thin’. ‘What’s in the book is representative of what we were sent, which I think says a lot about the state of the art world.’ This suggests that only a certain type of women feel comfortable posting images of their bodies or sending them for an art collection. 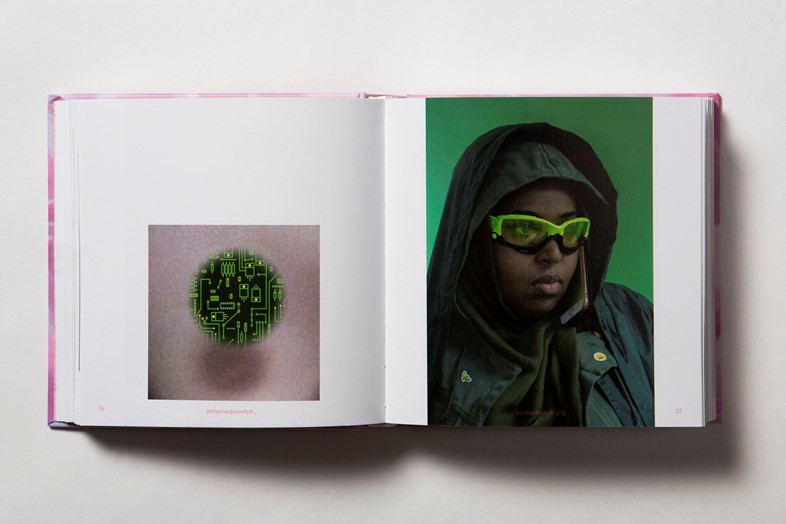 Arvida is certainly not someone we can expect to revolutionise the feminist movement. However, her more ‘palatable’ image can begin to introduce feminist notions to a not-so-feminist audience. By being exactly the kind of model many women look up to (often in hatred of their own looks), she has the power to gently modify the common understanding of the beautiful, ‘perfect’ body.  She can communicate to the world that in today’s society, even pink Barbie and her unicorn are outspoken feminists.

From Tomboy to Starting a Feminist Society: The “How” & “Why”
Roxane Gay: A Profile