I walked into the cinema room expecting the worst. Edgar Wright, who basically led all the pre-production of the film, had dropped out of the project as film director weeks before filming, making the press doom the whole film. Also, the thought of ‘Ant-Man’ himself entering the vast Marvel movie universe (which includes big and robust built superheroes like Captain America and Thor) seemed bizarre and, if I am being sincere, looked hopeless for the box office (an ‘ant’ sized man? Come on!).

If you were let down, like I was, by The Avengers 2 over-the-top action scenes that seemed to fill the whole film and a lack of character context, then you are going to love Ant-Man because it gives you reasonable amount of ace action scenes, plus excellent character context. The special effects are exquisite at making Ant-Man look like the coolest Avenger yet, and the CG effects make ants in the film look like colossal monsters at most times – but in the end, can also serve as awesome pets. The film also offers great background of the characters, such as: the original Ant-Man’s (Dr Hank Pym, portrayed by Michael Douglas) past and the reason he left the Ant-Man suit, and the reason why the new Ant-Man (Scott Lang, portrayed by Paul Rudd) wants to start over, in order to provide for his daughter. Corey Stoll (who you may recognise as Peter Russo in Netflix’s House of Cards) plays Lang’s nemesis, Darren Cross (a.k.a. Yellowjacket) who tries to copy the Ant-Man suit in order to sell it to Hydra, but things do not go as planned as he decides to wear his new suit and destroy Lang and the original Ant-Man suit. The fight is one of Marvel’s best action fights I have seen, and you will also laugh as the two men face the horror of being hit by a Thomas the Tank Engine toy. 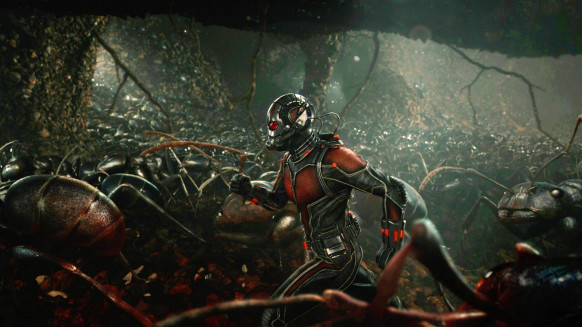 I highly recommend seeing this film if you are an avid follower of the Marvel cinematic universe. There is an appearance from Falcon and the Avengers’ HQ, as well as not only one, but TWO secret scenes at the end of the film (leaving your seat before the credits is for noobs). Also, watch the film if you are an Edgar Wright fan (Hot Fuzz, Shaun of the Dead, Scott Pilgrim vs the World, etc.). This movie has his continuous puns, dry humour… it just has Edgar Wright written all over it and I loved it. Obviously, if he had finally directed it himself it would just have been the cherry on top. Being half Latina myself, you would have imagined me being slightly offended by the stereotypical portrayal of Latinos by Michael Peña. But to be honest, he must have been the character with the funniest lines, and his description of how he gets told of information – to rob places – by word of mouth is by far the ‘Wright-est’ element of the film as swift shots are used to show the chain of people that the information went past. Another example of pure, contemporary, cinema gold.