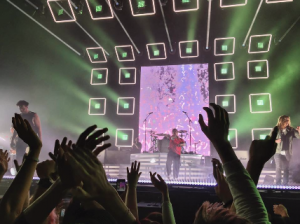 Nothing But Thieves stratospheric rise over the last three years has been truly impressive to watch.
Since the release of their promising self-titled debut in 2015, the band have well and truly begun
their ascent into the upper echelons of UK rock music, playing to huge audiences across the world
whilst supporting the likes of Muse and Biffy Clyro and having their follow up album (2017’s
excellent ‘Broken Machine’) chart at number 2 on the UK album charts. The release of their 4-track
stop-gap EP last month, the blistering ‘What Did You Think When You Made Me This Way’, and the
commencement of this UK wide arena tour only further cement their status as one of the country’s
finest bands. Based off the performance I witnessed in Cardiff, the only way is up for the
precociously talented 5-piece.

However, the night got off to a fairly muted start, with the Brighton based trio Demob Happy failing
to truly ignite the Cardiff crowd. On record, there is much to admire about the bands hard-hitting
blend of the relentless stoner-rock of bands such as Queens of The Stone Age; the bass riffs off Royal
Blood, 90’s grunge, and 60’s psychedelia. However, live it largely fell flat, descending into a
monotonous, sluggish cacophony of guitar, drum and bass; that was devoid of melody, personality
or charm. They were followed by the Anglo-Australian surfer trio Sunset Sons, who despite the
inherent likeability of their laidback, keyboard-centric take on indie rock, once again failed to truly
connect with the crowd, their presence providing an awkward fit for the event and putting a damper
on the energy of the crowd.

However, any misgivings I had about the choice of support soon dissolved as the stage-obscuring
smoke evaporated and the headliners took the stage. From the opening kick beat of ‘I Was Just a
Kid’ to the closing synths of ‘Amsterdam’, the band held the crowd in the palm of their hand,
delivering an enrapturing and fierce performance with a strong setlist that drew tracks from both of
their studio albums, whilst also giving the more recent singles such as the thunderous ‘Forever and
Ever More’ and sweeping ‘Take This Lonely Heart’ a chance to shine. The band’s unique ability to
distil their multiple influences (Jeff Buckley, early Muse, Radiohead, Hot Fuss era Killers, The Pixies,

Nirvana) into anthemic slices of modern rock without losing their own distinctive sound translates
perfectly in a live setting, the crowd screaming every word back to them. Connor Mason’s
spellbinding vocals are somehow even more powerful in person, his voice as effective when belting
out the ferocious electro-rock anthem ‘Live Like Animals’( a searing take down of the rise of the
modern right wing, with Mason venomously spitting out lines such as “We’re gonna make ‘em build
a wall/we’re gonna live like animals”) as when stripped back for raw and deeply moving ballads such
as ‘Particles’ and the heart-breaking ‘If I Get High’. After a rapturous sing along to the soaring
‘Sorry’, the band briefly left the stage, making way for an encore that descends into a crowd
rendition of Bruce Channel’s party classic ‘Hey Baby’. The band soon returned for a three-song
encore, closing with a heroic performance of ‘Amsterdam’, a song surely destined to be a set closer
for years to come, such is its visceral power and effectiveness as a crowd sing along. As the band left
the stage for the night, Cardiff was left buzzing with the realisation they had witnessed a band at the
height of their powers. Should Nothing But Thieves continue to develop their sound and reputation
as a live band, major festival headline slots and number 1 albums surely await.