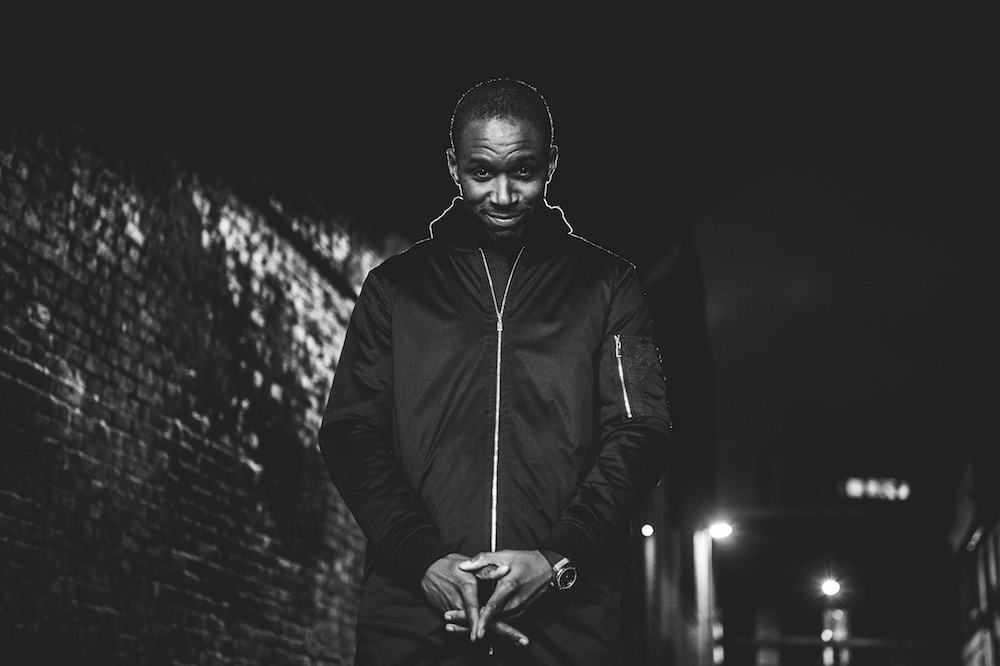 Wiley was headlining what might have been one of Cardiff’s biggest ever grime nights, but he was not the only legend on the bill. Supporting him was Meridian Crew Alumnus and fellow old school don, President T.

I got the call from Duane, one of President T’s people, during the Astroid Boys set as they performed Rinsa. I was told the President had landed and I could go and interview him now. After negotiating the Students Union security I was lead to the dressing rooms where I met the President armoured in a red jacket, hood up, with the confidence of a man who knew he was about to shutdown the show. The dressing table littered with fine spirits and plastic cups. He welcomed me with a handshake and then the interview began. The interview finished with President T rushing off to take a photo with Benji from the Astroid Boys before heading upstairs to take to the stage, as I hurriedly fetched the Courvoisier he left in his dressing room

Due to the loud nature of the dressing room the interview was mostly rerecorded in the hallway and this can be found here [Link to the audio].

Having seen President T tweet that he “Ain’t touched Cardiff in a minute,” I asked him about the last time he was in Cardiff.

I was last in Cardiff about ten, eleven years ago with a few mates from Manchester. They drove down from Cardiff. Went to a few bars, I can’t tell you what bars they were , but then we drove home, very briefly. But this is the first time I’m in Cardiff performing.

Did you have a good time when you were here last though?

Oh yeah, it was very brief, I was a bit drunk, always the case.

As long as you weren’t driving!

Are you going out tonight maybe?

Umm, after I’m gonna keep it short and sweet but if there is anything that can entice me, maybe so.

You’re sharing the bill with the Astroid Boys. Cardiff’s very own. Are you familiar with them?

I saw you talking to Benji just now as we were walking out.

Yeah, I’ve listened to some of their bits. Watched their videos and that and they’re very exciting for me personally and I know they’re going far.

They’ve worked a lot with Manga from Roll Deep, I know you’ve worked with him. You, JME and Manga on Different Patterns

Yeah, Different Patterns is a massive song and it’s getting bigger and bigger each year, so it’s great.

The video for that is really interesting as well

Yeah it’s a good idea he came up with for the video. I know it’s set a lot of people back like ‘What’s going on here?’ but I’ve watched it many a time and I love it. It keeps up the variety of what you can actually get out of grime.

Both you and Astroid Boys are releasing albums this year. Any potential for any collabs with them?

Oh, most definitely. I’m looking forward to collabing with Astroid Boys. I’ve listened to them myself and I’m very picky and choosy about what I do but I’ve heard their stuff and it’s like ‘Yeah, I can work with that’

I’m a big fan too, speaking of your own album Stranger Returns, any release date or anything?

There’s no release date at this given time but possibly in the future. Definitely before summer. It’s the final time, I’m making the final promise, because I’ve been promising it for years but Stranger Returns will definitely be out before the summer this year, 2017.

We’re all looking forward to it, can you give us any inklings of what might feature on it?

It’s all the Stranger Returning! It’s got other artists on there but the element of it is a bit of a surprise element so I’m gonna keep like that for now.

In the past year we’ve had top ten albums from Bugzy, Kano, Skepta, Wiley and soon, Stormzy probably. Could you be joining that club as well?

I’m in the club of top fives bro, top fives.

I’m sure we’ll see it fly up the charts. With all this new success, grime has attracted a lot of new fans, including ten year olds and eleven year olds who you hear rapping ‘That’s Not Me’ as you walk down the street, what are your thoughts on that, because I know some people aren’t really fans of the new people coming?

I must admit I came to grime quite late and your verse in the That’s Not Me remix was one of the things that made me properly look into it and start following it.

I’m honoured, I’m truly honoured and as long as people keep being willing to take in what I’m putting out then I’ll keep going.

You’re known for your punchlines, so what’s your favourite punchline of your whole career

It would be… “He woulda thought!”

And my last question. When you first started out in the game you were the only President T. Now, across the pond, in the USA, we’ve got another President T, President Trump, what are your thoughts on him?

All I’m gonna say is I’m the original President T and when he’s out of office, I’ll still be in office.

Now that’s a President I can believe in.