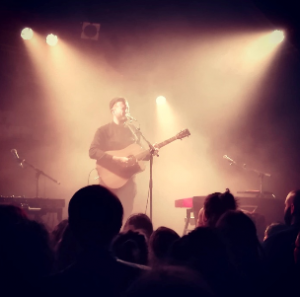 Discovering an artist two weeks before the concert was my lucky moment of the month! Brian
Fennell is an American singer, who has been writing indie music for several years, first with the band
Barcelona, and then went solo in 2016. He is now Syml, which means ‘Simple’ in Welsh, due to his
roots before being adopted. He just ended his Where Did We Go tour around the US and Europe,
and had a show in Paris, at the Point Éphémère concert venue on November 9th. And since French
trains are so fast now, I could get there from Bordeaux without missing my Friday lectures (it’s a big deal, trust me). The concert started with Harrison Storm as the opening act, who was great, with
only his guitar and voice. Then, Syml came to the stage, with another musician, and they started
playing beautiful music. It was both similar to the studio version, and very genuine at the same time.
Brian Fennell’s voice was on point to get the audience emotional when needed. He would let us ask
him questions in between songs, such as if he liked cheese (which he does), or if he was planning on
covering Britney Spears (which he was not). He also told us stories for some of his songs, such as
Girl, which he wrote for his daughter. He did not, however, sing any of his Christmas music, such as
Christmas lights. All in all, it was a great night, with an audience made of both teenagers and adults,
and a really authentic musician. I recommend listening to Fear of the water, Mr Sandman, or Hurt
for me. My personal favourite song is The War, which he sang because somebody from the audience
asked him. And he aced it, it was also my favourite part of the concert!