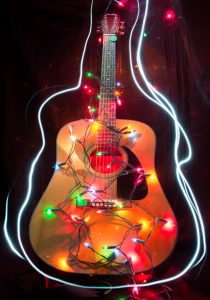 As Christmas is fast approaching you may find yourself unable to escape one thing, Christmas music! Love it or hate it, the same old songs get played every single year! If, like myself, you love Christmas music but tire of hearing ‘All I Want For Christmas Is You’ blasting out of the speakers then here is the perfect alternative Christmas music guide!

This is a slightly sad representation of Father Christmas and I hope no one demands presents like this, even if you are a present receiver rather than giver.

If Christmas isn’t the ‘most wonderful time of the year’ for you, this track will be right up your street! It’s also opened with dialogue from Les Dennis, so what more could you want?

A controversial one. Some may argue Coldplay aren’t alternative enough these days to make it onto such a list, but we will allow it just this once.

Love Christmas and The Smashing Pumpkins? Then this is your lucky day! This song proves that not all alternative Christmas songs have to be cynical, there are some joyful ones out there.

I’m not here to criticise Fairy Tale Of New York, it’s one of my favourite Christmas songs out there. However, if you’ve grown slightly tired of hearing The Pogues and Kirsty MacColl sing about a dysfunctional relationship why don’t you listen to The Hives and Cyndi Lauper sing about one instead!

The alternative world’s version of I Wish It Could Be Christmas Everyday, definitely one for the Christmas lovers out there.

Like Walking In The Air but not Aled Jones? Understandable, have a listen to The Maccabees’ cover instead.

From their Christmas Album released in 1999, a timeless indie Christmas song. And pretty easy to learn the lyrics of.

Packed full of classic Christmas references and a sneaky double meaning… if you can figure it out!

If you struggle to remember the characteristics of Santa just give this song a listen for a helping hand. (shout out to my Grandad for introducing this festive tune to me)

So, there you have it, my top ten alternative Christmas songs. Mix these in with the classics and you’ll never get bored of Christmas music!

Enjoy and Merry Christmas from the Xpress Music Team!

Enter Shikari Live and in Conversation