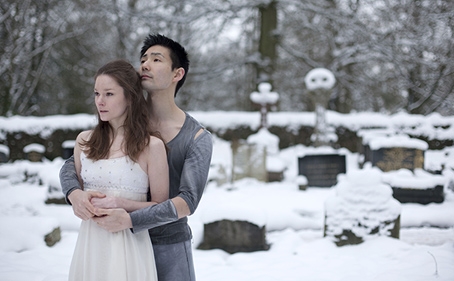 Ballet Cymru challenged itself by producing an adaptation of Shakespeare’s most famous masterpiece, Romeo and Juliet, at Wales Millennium Centre this November. The Weston Studio was fully seated and excitement was felt in the air. Classical strings music opened the show as the characters were introduced. Even though Romeo and his relatives owned the stage for the first few minutes, throughout the performance the focus was clearly dedicated to Juliet’s family.

It was a modern ballet that communicated relations between people well. There was a very strong opposition between characters’ personalities: powerful versus sensitive, realistic against naive, forceful in opposition to calm. Despite some minor mistakes, dancers were synchronic and professional. What is more, an interesting solution of clothing was chosen. Juliet’s dress was made of man’s shirt and her sister’s coat made from a skirt. This gave a nice symbolic meaning of something unusual, even a little bit magic.

As Romeo and Juliet is a world famous play, the audience was already familiar with its plot. However, Ballet Cymru chose to perform it in a straightforward way using obvious objects to convey the meaning: actors pointed to the ring while asking marriage permission and pretended to wipe sweat to demonstrate tiredness. The simplistic way of developing the plot reduced the dancer’s capacity to engage the audience and tell the story through dance. Moreover, the performance did not avoid pomposity and some scenes were more comical than dramatic. Maybe it was done on purpose?

It is a very demanding task to bring a new angle to a play that has been adapted hundreds of times before. Even though the second part engaged more emotions and power, tension and drama was still missing. Applause goes to Juliet’s parents and brother, though. Their passionate dance and inner power kept the performance going.